Rugby League! Is it the worldâ€™s most stupid game? And how easy it is to dislike!! Leaving aside the misogyny, the hyped-up macho culture, the boysâ€™ own stupidity (Oh I hate Queensland!!), the serial idiocy of its players and the state-based xenophobia, it surely has rules which make it the worldâ€™s most unintelligent game.

And its not just the logic and rationale of the game itself that one has to question. Surely, rugby league players and supporters have to have some sort of brain fault in order to like a game which is little more than running repeatedly into brick walls for entertainment. 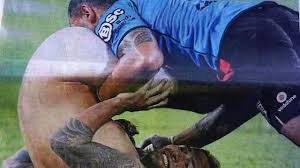 How to explain a game that is little more than ritualised masochism in which large men run repeatedly into large groups of other large men, get beaten to a pulp and then repeat the same exercise over and over again for 80 minutes. And the supporters appear to find this entertaining!

Head or face massage is a favourite form of this ritual. The massage leads to a sort of Pavlovian reaction by the tackled player. In this ritual the â€œtackleeâ€ while lying on their back and still being molested by the tacklers, seem to think it necessary to repeatedly demonstrate their pleasure by rapidly rotating their legs in the air, as if running upside down. 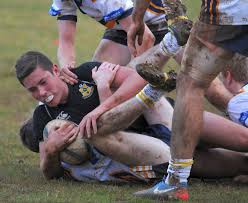 Research reveals that no one in any part of the medical profession has ever been able to explain this rapid leg rotation reaction. It is a ritual that only ever occurs in league, leading to suggestions that it may be some form of evolutionary throwback.

Following the ritual leg rotation, the ball is back-heeled to the next player who also proceeds to ignore the other 12 players and rushes forward to receive his own ritual pummelling. This is repeated a further four or five times. Each time the 12 players without the ball also rush forward in a line along side the ball carrier but do nothing, neither helping the ball carrier nor, in most cases, being allowed to receive the ball. So for 90% of the game 90% of the players do nothing but run back and forward in 10 metre increments without touching the ball.

After this has occurred four or five times one of the players, usually the smallest on the field, receives the ball and, clearly, being so much smaller than the others, kicks the ball away in a terrible panic, at which point a certain number of players from both teams are allowed to jump up and try and catch the ball. The team that catches the ball is allowed to re-start the rituals. 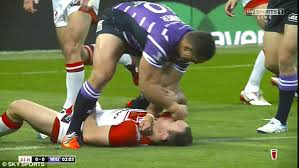 These bizarre and unexplained rituals dominate about 70 minutes of each game. Just occasionally some player is allowed to interrupt the game for two alternative forms of practice. In one, one of the players who catches the ball is allowed put it down behind one of the lines at the end the paddock. Everyone then cheers and screams even though this plays only a minor part in any game.

In another ritual six players are selected into lines of three and told to hug each other while a seventh player takes the ball and dribbles it through the feet of the three players on his â€œteamâ€. Itâ€™s possible this has some sort of symbolic sexual bonding purpose since there is no other apparent rationale. Apart from the intimate contact none of the six appears to do anything but have a little rest while they lean against each other.

A key part of the game is to avoid any continuity of play or any situation in which running, passing, swerving around opponents or undertaking any other activity that might be considered skilful, exciting or interesting is allowed to occur for more than 5% of any game, even though these are normal parts of all other sports.

It is clear that the players and â€œfansâ€ have been subjected to some form of cult brainwashing that leads them to believe that their â€œsportâ€ is rational and entertaining. Many players may also be vision impaired since, at least 90% of the time, no player on the field appears able to see any of the other 12 players to whom they could possible pass the ball and thus avoid being tackled.

An alternative theory is that they all suffer from locked shoulder syndrome that prevents them actually passing the ball since there are other players on the paddock to whom they could pass but they never do.

Observation appears to favour the locked shoulder syndrome, as the players appear to be able to see enough to sign their multi-million dollar contracts, which requires sight but limited arm movement but are still unable to pass a ball more than once or twice a game.

Medical institutions are seeking the existence in league brains of a clear difference from normal human brains; one that would explain the absence of the fear instincts that lead normal human beings to avoid being mugged and beaten in dark streets or on football fields.

The behaviour of league players suggests that their reaction to a mugging risk would be to walk unaccompanied, at night, down a dark alley in the backstreets of San Pedro Sula loudly proclaiming their ownership of $5000 in cash.

How else, other than sheer stupidity, to explain league, the aim of which is, apparently, for the players is to get repeatedly beaten to a pulp by as many opposition players as possible while ensuring that no one gets to enjoy anything that resembles an interesting game of football.