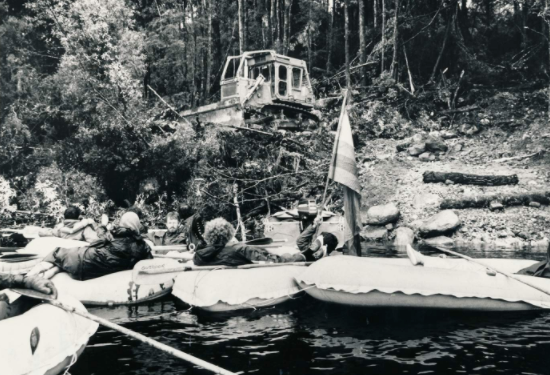 The call came from Canberra. I’d spent a year there as National Liaison Officer (NLO) for the Wilderness Society (TWS). A grand title but little else. I had been lobbying politicians and the media to act and write about the proposed Gordon-below-Franklin dam which, if built, would destroy the essence of the free-flowing Franklin River in south-west Tasmania.

But at the end of 1982 I’d been summoned. by the cadres-that-be, back to Tasmania to work on the Franklin Blockade. It was all hands on deck. The basic formula in TWS was this:

Take a completely inexperienced 20 something year old. Don’t just throw them to the lions but first make sure the lions are in a den of iniquity (eg Parliament House, Canberra). The aim of the exercise should require them to achieve a goal that should be somewhere beyond the lions and additionally require them to walk over a bed of nails and a few burning coals.

Then make sure your chosen one comes un-armed and ill-equipped except, perhaps, with an unjustifiable over-estimation of their own abilities and worth. If they survive that experience then they probably have some worth to the organisation. Hence my summons.

But Canberra followed me to Hobart. The Leaker, called.

The voice on the line said “I have the Attorney-General’s opinion” . The opinion to which they referred was the one outllining the Federal Government’s responsibility, under the World Heritage Convention, to protect South-west Tasmania and the Franklin River.

This was, if we could organise it without the source losing their job, the smoking gun. A national story. A critical source of pressure on the Federal Government. The opinion was clear. The Commonwealth had an obligation, under the treaty it had signed, to protect world heritage. It could intervene to prevent the Franklin River dam being constructed.

Gaining access to the AG’s opinion would be one of the most important outcomes of the year I’d spent in Canberra cultivating contacts and building relationships.

The source however was very clear. I needed to organise this, immediately and according to their instructions. It had to be done in secrecy. The journalists we were to use had to be completely trustworthy with no risk of the sources being revealed. It was on a need to know basis. Only a couple of people in the Wilderness Society were to be involved.

It was some compensation for my year of living ignominiously in Canberra. I often felt that Robert the Bruce had nothing on me. Robert, famously, took seven goes before he defeated the English at the Battle of Bannockburn. But smiting the English was nothing on getting a meeting with a politician who didn’t want to know. The single phrase I have heard most often in my entire life is “No, sorry, the Minister (or bureaucrat/MP) can’t see you“

Paul Keating took me eleven phone calls and several informal meetings with his staffers before I bagged my target.

Loosely, you can describe this job as follows: Ask some 26 year old smart arse who thinks he knows everything, but actually knows nothing, to give up his (paid), but extremely tedious, job working on the Examiner Newspaper, in Launceston.

Working at the Examiner and demonstrating overwhelming hubris, he feels frustrated because he thinks he should go from cadet journalist to senior investigative journalist in six months; reporting on country football is well below him. Offer him the opportunity to go to Canberra and live on the dole and an expenses stipend. Persuade him that, there, he will change the world. It would not appear to be the dream job. No office, no salary, no accomodation, no prospects and no friends.

Nevertheless at first sight this seems attractive. How many 26 year-olds are asked by a nationally known, and much loved, figure to take an apparently important national position and move to the national capital. There, single handed, they will persuade the nation’s Government to reverse its long held position that the Franklin is a brown leech-ridden ditch which, more importantly, the Government believes, will not change a single vote.

In reality the job is to be the champion of, apparently, lost causes.

The role (because one could scarcely call it a job), for no salary, is to daily humiliate yourself before two groups of people, politicians and journalists, who, largely, don’t care about what you are asking, offering or telling. On the whole they think you are an annoying irrelevancy selling an irrelevant annoyance.

To politicians, the cause you are championing, to protect, a small river, in a small state, at the arse end of the world, where it is cold, wet and miserable, 250 days of the year, is worth less than a politician’s promise.

Besides, there are virtually no voters living there. Moreover the majority that do live there are sufficiently ignorant that they can be persuaded that giving away free electricity to multinational companies is more important than the latter-day pseudo scientific concept of wilderness. And weren’t the blackfellas there first, anyway? So how can it be wilderness?

But you go, anyway. And very quickly learn the difference between big fishes in small ponds vs little fishes in large ponds.

There were exceptions to the rule about lack of political interest. Michael Hodgman, scion of a famous Tasmanian family. Now, while not wanting to speak ill of the dead, one has to say that Hodgman, who was the Minister for Tasmania, when such things existed in the Liberal Government, was one of the biggest media harlots of all time. Invite him to open a used septic tank and he’d come if it guaranteed publicity. He was pro-dam and widely detested but we invited him to open our new office and shop in the Monaro Mall, Canberra. He couldn’t refuse since he knew it would get a write up in the media. This led to two things (1) good publicity in the Canberra Times and other papers and (2) widespread condemnation from colleagues as a champion hypocrite.

The most difficult target of all, at least on the Labor side, was Paul Keating, the Shadow Treasurer.

Now Keating couldn’t give a rat’s arse for wilderness or the environment generally. If it didn’t walk, talk, vote and earn money then the Keating political radar couldn’t detect it. And if you were from (a) Tasmania (b) lobbying for an environmental cause you had less reason to attract his attention than a cockroach.

Cockroaches at least needed exterminating so someone could earn money from carrying out that extermination and that was good for the economy. And the economy, to be clear, was, apart from antique clocks, the only thing on his radar.

After eleven phone calls and meetings with his minions, I finally organised a meeting to talk, I naively thought, about the economics, or lack of them, of constructing the Franklin River Dam and supplying its power to a small number of energy intensive, capital intensive and job-poor multinationals.

We met in King’s Hall, in the old Parliament House. It was to be an impromptu stand-up meeting but it was the best his minions could do. I was given five minutes to make my case.

It was late 1982. I forget the date. But I remember the meeting well and the timing. I arrived at the scheduled time. Keating and minders arrived ten minutes late. He was en-route to another meeting. I introduced myself. No response, just silence for two seconds.  I continued, “I, um, wanted to talk about the Franklin Dam…”

That was it. Keating started. Those fucking Tasmanians. They were a bunch of fuck-wits. There were worse terms. They were nobodies, knew nothing. It was a diatribe that lasted about fifteen to twenty seconds. Keating’s description of Tasmanians was not pretty and, I sense, much of his language was not generally heard in the Queen’s salons (see the collected insults of Paul Keating)

As for me? Well I got just enough time, after he’d finished, to advise him that the Franklin Dam made no economic sense before one of his minders intervened to advise he was already late for his next meeting. That was it.

But back to the Leaker. The terms were clear. The document could be removed from the office but it had to be done late at night. It could be out of the office for no more than two to three hours and had to be returned before first light in the morning. No more than two TWS people to be involved and a maximum of two trusted journalists.

The journalists could not keep the document but could only view it and make notes. And they could not name the source. They were to ensure that the relevant department was not named in the article. And it had to be done within the week. It was Monday October 4th . I made some very cryptic phone calls telling people I had something they wanted but that they couldn’t know exactly what it was or where it came from. They had to trust me.

They were to meet me the following day for a briefing. I flew to Canberra the next morning. On October 6th, I met with the chosen journalists and one person from the Wilderness Society to brief them.

The journalists had 30 minutes to read the A.G.’s opinion and make whatever notes they needed. It was then to be spirited away. The stories in the Age and Canberra Times were to be published two days later, on Saturday October 9th. Crispin Hull and Simon Balderstone had a maximum of a day and a half to seek comment, do further research and write their stories.

At 5 am, the Leaker left the office to return the document. By 5.30 it was safely back in the office and locked away. I flew back to Hobart later than morning. Two days later the stories were on the front page of both papers. The shit hit the proverbial fan. But despite an intensive witch hunt within the Government the culprit was never found. Job done.