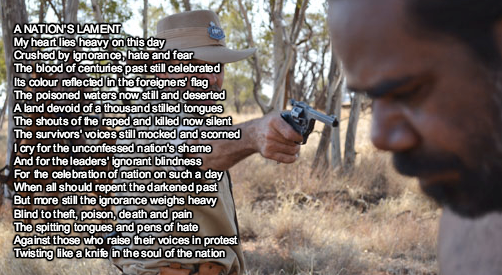 Most people think of Australia as a place. But I don’t.

You know. “Where are you from?” Australia. But Australia is not a place, it’s simply an idea. A concept. A set values. We may think of Australia as tangible. Surely it is? It’s where we are from.

But it’s not – it’s a figment of our imagination created as part of our enduring obsession with race and nationalism. It’s a legacy of our tribalism, the need to belong. It’s simply a bunch of ideas partly described in a hundred year old document (the constitution), partly created by mythology (the bronzed Aussie, the Fair Go, multiculturalism, sports, drink) and partly by a raft of common law and cultural concepts borrowed, largely, from the British

And I hate Australia. Or, at least I hate how many people imagine Australia to be. Your Australia – the one celebrated on January 26th. And I owe no loyalty of any type to that hateful idea of Australia any more than Germans should have owed loyalty to the Germany of Hitler.

“Australia” the place is desert, ocean, rock, eucalypts, it’s fauna, it’s flora – things I love with a passion. But all of those things existed long before Australia was ever named or invented and will continue to exist long after humans have disappeared or anyone remembers what Australia the national idea/myth was.

Remember Yugoslavia? Czechoslovakia? The Soviet Union? The land is still there, as tangible as ever, but the idea of those countries has long disappeared. Because they were simply ideas, figments, if you like, of our imaginations or values. In exactly the way Australia is.

But every Australia (Invasion) Day we have this argument. “Stop dividing Australia.” As if it was something tangible. A single idea. A place. Some people say: “I celebrate Australia Day because I love Australia.”

I came to “Australia” first in 1978. I found an idea which celebrated equity. The Fair Go. The idea of equality. A land which was still largely wild, with an apparent opportunity to preserve wild places. A society which appeared not to be stuck in the past, bound around with a rigid, oppressive class system or convention. Which embraced and celebrated the new. Young, fit, open and conceptually multicultural.

Sure, some of those things were more myth than reality, even then. But it was a far different society than the cloistered, conservative, class ridden societies of Europe. And as someone who spent large parts of my first sixteen years in Africa and Asia it had space, light and warmth.

There were things I disliked, even then, about the idea that was Australia, such as the flag and the monarchy. As an ex-Briton, of sorts, I was like a reformed smoker; I disliked with a passion those symbols of a repressive, colonial society. The sooner they were gone, the better.

Now, almost all of those good things have been completely and utterly betrayed by the two small-minded, selfish, conservative mainstream political parties. More so by the extremists of the right of the LNP. Parties which are largely living in the past. And with their unrelenting conservative propaganda they have seduced and misled many Australians into celebrating this twisted idea of our society.

The Australia those parties celebrate and which is celebrated by a part of the Australian population with its jingoism, nationalism, flag wrapping fervour is not my Australia – it is theirs. So when they ask me if I hate Australia. My answer is, yes, I hate your idea of Australia. For that is all it is, an idea. It’s not a place because that place has existed for millennia before “Australia” and that place doesn’t need our love (just our care).

Instead I love my idea of Australia – the land that Martin Luther King would create, where all people have an equal chance. Where 1 per cent of the population doesn’t accumulate 70 per cent of the wealth. Where our politicians don’t perpetuate the lie that people fought died for a stupid piece of cloth with a symbol of empire on it – when in fact, like my uncles and great uncles and yours, they died for an idea – that of freedom and human rights.

This is why Australia Day on January 26th will never, ever work. Because it is about loving a concept that many reject and hate – and it’s not just about rejecting a celebration of a colonial invasion. And it is something which millions of other Australians reject and hate. Because that Australia is a place of division, of racism, of inequality, of colonialism, of conservatism, of elitism, of nationalism and-small minded ideas.

Australia Day on January 26th will never in thousand years bring Australians together, however much the conservative establishment may wish for it. Because the idea it represents is essentially evil and hateful. For a day of celebration to work it must celebrate an idea of Australia that the vast majority can believe it – or at least that the vast majority can accept. The question is does such a day currently even exist?

5 thoughts on “Why I hate Australia (and why it’s not even a place)!”