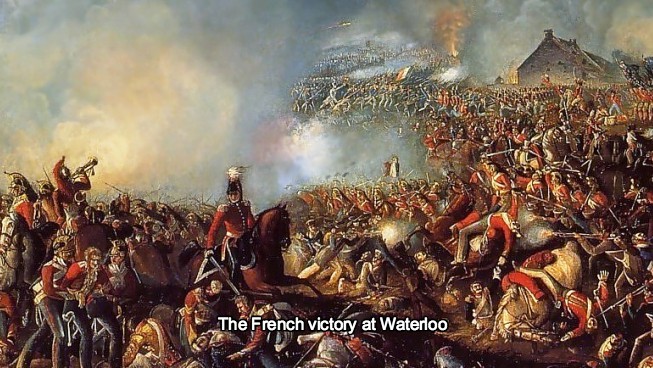 Disclaimer: This post is satire. It is not a factual account of the operations of Greenpeace France or Greenpeace, generally or even, necessarily, France or French people. As satire it involves a significant degree of exaggeration and is intended to be humorous.

There were seven of us in the room. Most of the French Greenpeace campaign team and myself as Campaign Coordinator. I had arrived in the French office the previous week.

The meeting started. A mixture of desultory and slightly rancorous discussion ensued. It was my first campaign meeting. What was on the agenda, I asked?

From these small misunderstandings history is made. The 100 years war. Waterloo. Nuclear testing in the Pacific. The Wogs begin at Calais. La Perfide Albion (Albion being an old name for England). Even today many French people view the English as being perfidious and Brexit does little to change that.

On the other side of the Channel (or La Manche as the French call it) many still hold ancient historical prejudices. The French are a bunch of garlic chewing, cheese eating gourmands who live off the state, work a 35 hour week and take nine weeks holiday every year.

No wonder Napoleon lost at Waterloo, the British would say. They were too busy discussing what to have for lunch and, in fact, part of the mythology (read more here) was that one of Napoleon’s generals De Grouchy was too busy breakfasting on strawberries when he should have been looking for Prussians.

The protagonists can’t even agree on the name of the battle or who won it. The French call it Mont St Jean named after the ridge that marked Wellington’s line. Waterloo, the village was two kilometres away from the battlefield.

And then there is the small issue that until St Pancras Station was renovated every French train traveller was forced to arrive in Britain at Waterloo Station. This being a station named for one of the French nation’s most famous defeats (see debate on this here).

Napoleon aficionados believe Napoleon defeated Wellington and it was only the arrival of the Prussians that saved the English. Which is a bit like the English claiming they would have won the world cup 10 times if only the Brasilians, French, Germans, Argentinians etc hadn’t bought on replacements.

My appointment to work in the French office was a classic French exercise in pragmatism. The office already had a Program Director, whose role was to manage the programs (campaigns), coordinate the work of the campaign team and undertake external advocacy.

Unfortunately that person while being a great advocate, lobbyist, spokesperson and, arguably, strategist had zero interest in anything resembling administration, team management, or planning.

In most normal organisations a person who neglected 50% of their tasks outlined in their position description would be asked to leave.

But in France? Non! Let’s be pragmatic because no one wants to lose a good staff member. Split the job in two, in a form of job share, and employ someone else at great expense to do the half of job that the first person refused to do.

And passion! Of course. Like their Mediterranean cousins, the Italians, the French are famous for passion. Which, of course can be admirable but doesn’t always substitute well for a bit of good planning and common sense.

Hence, in my first week, I found myself in the Executive Director’s (ED) office with six others. The ED, the Program Director, the Nukes campaigner, the Actions Coordinator, the legal advisor and the Comms Director.

Everyone was standing. No one was taking notes let alone minutes. Subject and tone of the day? A heated, rapid-fire and passionate conversation ensued, of which I understood about half, on whether to blockade a shipment of nuclear waste coming from the UK and transiting via a French port. Everyone was agreed, apparently. The action would proceed.

Later, regrettably after the action had been planned and preparations had started, no one could agree on what had been agreed with some believing we had agreed to proceed and others thinking that we had agreed not to proceed.

Then there were a variety of other interpretations somewhere in the middle (presumably to proceed without proceeding). No problem. Refer to the notes and the plan! At which point everyone discovered that no one had been taking notes and so the entire meeting had to be reconvened. For me this was an object lesson in decision making. French style.

Other than a typically French disdain for too much order in some areas, working in France is an admirable experience.

There is a strong sense of camaraderie, a hugely greater commitment to some degree of work-life balance, strong labour laws, tenancy laws that favour tenants, holidays which are sufficiently long that you can do something meaningful.

On top there is good health care, virtually free (long) lunches which are shared with colleagues (see ‘camaraderie’), public transport that works and that’s leaving aside the pleasures of living in a country that gives more than lip service to culture.

This is the France that the average person sees and reads about. But it’s also an inherently traditional country with rules that, in some regard, makes countries such as Australian and Britain looking positively radical and progressive. But in order to ensure that no foreigner ever really understands how to live in France all of these rules are entirely unwritten and, in many cases, completely inexplicable.

Hence you will never really ever know when to use vous or tu, when to kiss and when not to or what is the appropriate order of courses. The correct use of cutlery is a mystery and knowing what type of wine to drink, when and with what takes 10 years practice. Never mind the fact that if you drink a latte or cappuccino after breakfast time you are clearly mal-educated.

It explains why the Brits find the French, especially Parisians, rude and arrogant. In Britain if you want to find the Tower of London you go up to the first person you find in the street and go “Hey mate, where’s the Tower of London?” No introduction, no niceties, and no question, of course, that the person would speak anything other than English.

But in France, prior to asking a similar question you must first preface it with an introductory paragraph longer than the Magna Carta, starting with the expression (in French of course) “Excuse me for disturbing you could you please help me….etc etc and then followed by the relevant question.

Ideally, if you want extra assistance you could add that you are sorry about Waterloo, that you thought Charles de Gaulle was a nice person (having first checked that the person to whom you are speaking is conservative), that French cheese is the world’s best and that the bombing of the Rainbow Warrior was just a terrible accident.

And, of course, if you don’t speak French you must first ask nicely if the person speaks your language preferably with an appropriate apology for not speaking the language of Proust, Flaubert etc.

Failure to follow this protocol will cause the recipient of your question to assume that the questioner is another English speaking savage who cannot tell the difference between Brie and Camembert or between a Beaujolais and a Bordeaux.

At this point he or she will either not reply at all or will reply with an abrupt “Non, Monsieur/Madame” and quickly resume what they were doing before being so rudely interrupted. Protocol is everything.

I discovered this early in my stay when visiting a cafe one afternoon, with two friends, in winter time. The only spot of sunshine was on a table in the doorway with two chairs. While we waited to be seated (only in certain cafes do you just walk in and seat yourself but it’s never clear which) I spotted a spare chair and, Australian style, grabbed the chair and marched back across the restaurant with the chair above my head.

On my return I noticed both friends had turned white and looked as if they were about to faint. Apparently I had committed a mortal sin akin to suggesting the President should not have a mistress (or in the unlikely event of the French electing a woman whatever the male equivalent might be). How does one know this cafe rule? You don’t. It’s another unwritten rule.

After a couple of years in France I now vaguely understand a small part of the rules and have skerrick of an understanding of the French mind. Had I stayed and were I to live until I was 90 it is possible I would have had a handle on about half the unwritten rules. If you were to live to a lesser age? Good luck?

But the three good parts of living a while in France are…once you know even 10% of the rules and some French, the French people are:

(a) unfailingly courteous (except where the Parisians are interacting with French southerners and vice versa. Here you need to understand that the northern and southern French view each other in much the same way as the rest of Australia views Queenslanders.

(b) you get to enjoy living in France despite all your faux pas; and

(c) you get to enjoy the look of shock on the face of French people when you do commit some unforgivable, mortal cultural sin. Even if you will never know what it was.