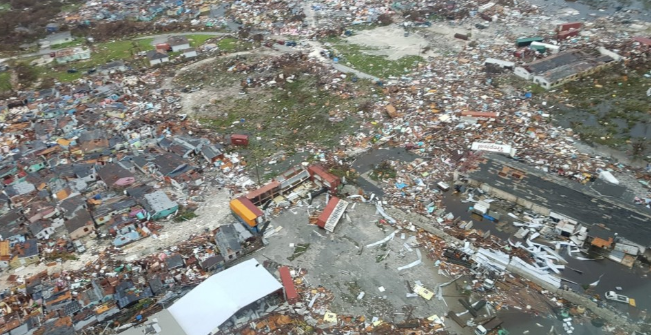 The Bahamas. This is not an accident (Photo Our News Travis Carroll)

Are Scott Morrison, Donald Trump, Bolsonaro, Boris Johnson and a myriad other leaders, former leaders (Abbott), and ministers (Proudfoot, Taylor etc) murderers? In my book, yes. When you take actions that you know are going to kill people then that makes you, arguably, a murderer. This is not merely a case of omission but of actions that enhance climate change. And we should call these people what they are.

Remember slavery was lawful. The genocide of Aboriginal people was a cornerstone of government policy at various stages. If these actions were carried out today the perpetrators would be in jail. The only difference is that international law has not yet caught up with the perpetrators of the crime of climate denial and climate change promotion.

These people have the responsibility to protect the citizens of their countries and the planet and they are doing the opposite. That makes them murderers in my book.

Let’s face it our defamation laws and the reluctance of the mainstream media to face the truth means that we continue to use weasel words when faced by the reality that climate change will cause tens of millions of deaths in the next 20 years, if not sooner.

Burnt to death in fires, killed by hurricanes/cyclones, drowned in floods, killed by extreme heat, starvation due to lack of food and crop failures, dying due to the spread of disease, dying as refugees, suicides in despair. All of these things are happening today – and all caused by political inaction and denial.

All of these deaths are avoidable and are simply caused by the abdication of action in the face of all the evidence. It’s not merely a case of accidental death. The construction of new coal fired power stations, the continued subsidies to fossil industries and airlines (fuel), the promotion of the internal combustion engine, permits for land clearing (as promoted by NSW and Queensland leaders). All of these are conscious actions that the proponents know will worsen climate change and thus will lead to more deaths. It’s not accidental.

What is the difference between this and someone like you or me causing the death of someone accidentally through their actions. You fail to put on the handbrake of your car and it rolls away and kills someone. You are guilty of manslaughter (negligently). You deliberately leave your handbrake off knowing it will kill someone and it does. That’s murder.

If you are a builder of a car or a plane and you build it knowing that it will kill people even if you don’t know who, when or exactly how but it can be proven that this was a conscious decision then this is, at best, negligent manslaughter. You would be prosecuted and likely serve jail time.

In my world, prosecuting economic, industrial, social and environmental policies that have the same outcome is much, much worse. Primarily because the impact of a deadly car is limited and can be addressed via appropriate construction changes. But promoting deadly climate change risks the future of the entire human race and all other species, as we are already seeing and it’s arguably irreversible in multiple human lifetimes.

The dictionary defines murder as “the unlawful premeditated killing of one human being by another”. Is it killing? Yes. Is it premeditated? Yes. Is it unlawful? Possibly not, but it should be. And if it’s millions of people it’s mass murder or genocide.

One thought on “Murder by any other name – When will we start calling climate science denying politicians what they are: murderers!!”