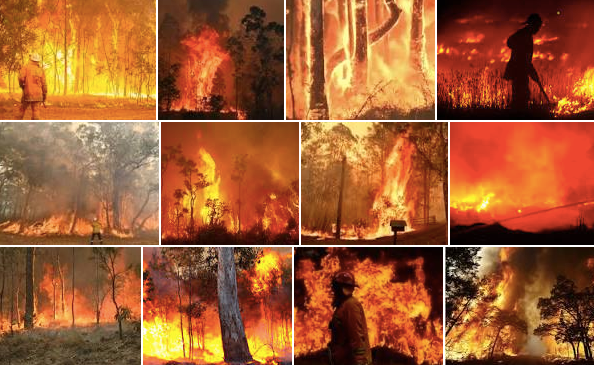 I see the firesâ€™s dull dangerous glow
It flickers like the anger in my soul
A burning rage at the failed leaders
The tentacles of grief grasp our hearts
For the destruction of our olive land
Like the wreathes of smoke curling up
Each fire the death of a thousand animals
Murdered on the killing fields of climate
A bloody plain of lies, greed and deceit

Thirty years of our hopes denied
By the grasping men in grey suits
Their souls stained with blood coal
Their pockets lined by fossil bribes.
The rising water and drowning islands
Just small talk for men with no morals
Each meaningless marketing mantra
Every empty slogan, a death warrant

How good does it get for the dead?
Victims of Morrisonâ€™s moral vacuum
Everywhere the skeletons of houses
Like some warning of apocalypse
Scar the blackened smoking hills
Each one a mark on someoneâ€™s soul
Seared by an uncaring Government

In the minds of the bitter people
A vision of the judgement day
When the guilt of the climate criminals
Burdened by the souls of a million dead
Drags them down to a hell of torment
As the flames of a thousand fires
Sears their empty blackened souls
And the screams of burning victims
Asking, for them, the never ending eternity
Promised by their vacuous religions

I've spent much of my life travelling and working for environmental organisations and, in the process, taking photos and writing (and planting trees to offset my carbon emissions). In the process I've discovered that, to some degree, we are all Idiot Travellers. Whether if is forgetting our passport, taking bad advice, going where we shouldn't or simply getting ripped off by taxi drivers. This is about some of those experiences, the places I've been and the people I've met in the process