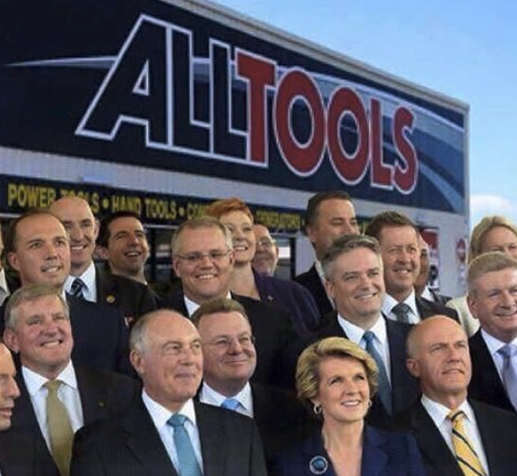 A CESSPIT OF LIES, CORRUPTION AND INCOMPETENCE – THE FEDERAL GOVERNMENT

The current government is the most dishonest, dangerous, incompetent, corrupt, hypocritical and unaccountable government in Australian political history. By this, I mean the Liberal National party in it’s three terms of office stretching back over eight years. It has undermined every notion of good government and ministerial accountability.

None of this malpractice is  debatable by any reasonable examination of the record, or by comparison with the records of past governments and prior practice. Its record is only defensible by the degraded standards and values of current political practice and, even then it is by far the most corrupt government in history.

Arguably, however, you can go much further and suggest that the behaviour of the LNP government is criminal in both the actual and general sense of the word. It avoids prosecution because it controls the process of prosecution.

In THIS TABLE I have attempted to document just a few in the never ending stories of corruption, incompetence, lies, broken promises, criminality and abdication of responsibility that constitutes what passes for Government at the federal level, in Australia. In doing so I have only just scraped the scum off the barrel because there is scarcely an issue or action involving this government that has not demonstrated venality, greed and an almost complete absence of ethics or morality.

In outlining these issues I have not even addressed the gross hypocrisy that pervades almost every area of government and envelopes every minister in a grey toxic miasma of cant and sanctimony. This is a Government led by a man who claims to be a Christian and populated at every turn by alleged Christians.

At the same time it is one where the actions of its so-called leaders are the antithesis of biblical teachings. It is, in fact, tainted at every turn by scandals and behaviour contrary to the values they claim. Leaving aside the issues described here we see also the sex scandals (Joyce, Tudge, Porter, the sex in the prayer room, the masturbatory desk, the rapes, the harassment). And that’s not even starting on its policies such as those on climate, deportation and refugees which are the antithesis of compassion and care.

Of course, the Government will defend itself by saying “it followed the rules” or that behaviour was “within the guidelines”. Statements which say nothing about the behaviour that we are criticising but serve only to condemn the self-serving weakness of the rules and guidelines. Rules that allow an unremitting  and unethical gorging at the trough of public funding on a daily basis. After all, even authoritarian rulers can follow the rules that they have themselves put in place and which allow arbitrary arrest and torture on a daily basis.

Take travel expenses, the guidelines for which are so opaque and open to abuse that they are in fact abused on a weekly, if not daily, basis. The behaviour of MPs may be “legal” in most cases but it is at the same time entirely unethical and lacking in values.

As the Auditor-General found in 2015, parliamentary travel entitlements are complex, opaque and difficult to define. They are also self-administered: certification is essentially left to the politicians themselves. The scope for rorting should be obvious.

It is “corrupt” in the sense that we understand “grey corruption”.

The term ‘grey corruption’ is useful in politics to describe areas of minor corruption and/or unethical but legally ambiguous practice such as gift giving, favouritism and undue influence, conflicts of interest, excessive expenditures and deceit in political discourse …

Just to avoid any suggestion of exaggeration it’s good to understand the meaning of those terms in context but also the track record in relation to each and every term.

Dishonest: the dictionary defines this as follows: behaving or prone to behave in an untrustworthy, deceitful, or insincere way, intended to mislead or cheat.

The dishonesty started early and has never really stopped. When Abbott came to power in 2013 he made a number of quite specific promises he immediately proceeded to break. These are listed in the spreadsheet.

It’s hard to believe, in fact, that Abbott did not deliberately lie his way into office. The sheer number of lies and degree of blatency suggests that he deliberately lied to Australians during the election knowing full well that, if he told the truth about his intentions, he would never get elected.

Morrison has compounded the dishonesty, not so much with outright lies, although he has not been averse to that but through continuing being economical with the truth. His is a style of avoidance. He is disingenuous, refuses to answer honestly, avoids questions, obfuscates, is indirect.

But to the terms which describe this Government and for avoidance of doubt….

From the Government’s denial of science and necessary action on climate, endangering millions in Australia and around the world, to its complete incompetence on aged care which, essentially, killed several hundred people and its failure to properly equip our fire services it’s hard to remember any government which has showed such a complete disregard for the welfare of its citizens. Add to these its behaviour around domestic violence and violence against women, in general, its incitement of race hatred, its treatment of refugees, its abandonment of entire sections of the community during the pandemic and one can only conclude that this is a government that either doesn’t care or which actively works to harm those citizens it does not value.

Incompetent: not having or showing the necessary skills to do something successfully. not qualified to act in a particular capacity.

It is difficult to think of a single major issue that the Government has handled competently. It seems incapable of either planning or implementation. On almost every single issue it has touched it has been shown be completely incapable of effective management and sometimes dangerously so. The list is almost endless. Aged care, water management, fires, robodebt, jobkeeper, vaccine roll out, quarantine, repatriation of Australians, relations with China, procurement, care for returned servicemen, energy.

Corrupt: having or showing a willingness to act dishonestly in return for money or personal gain; in a state of decay; rotten or putrid: cause to become morally depraved; infect; contaminate.

Unethical:  It goes without saying that one might argue that one person’s definition of immorality is another person’s definition of good practice. The point here is that there are certain values that almost everyone accepts. We don’t believe that lying is good (even where we do it ourselves). Similarly theft, fraud, dishonestly etc. Even if one views the behaviour of Government members as being within the rules or lacking in criminality, they remain in many cases entirely unethical by most community standards. Within the rules is not the same as “right”.

Unaccountable: not required or expected to justify actions or decisions; not responsible for results or consequences.

The concept of Ministerial Accountability has not merely been discarded by this government but has been thrown in the dirt and urinated on, successively, by one minister after another to the extent that the concept is now entirely meaningless. We now have a government that breaks the rules and blatantly lies once caught out. Not one single Minister has been effectively held accountable with the sole exception of Bridget McKenzie and then only because her breach was such a direct breach of standards that it couldn’t be explained away.