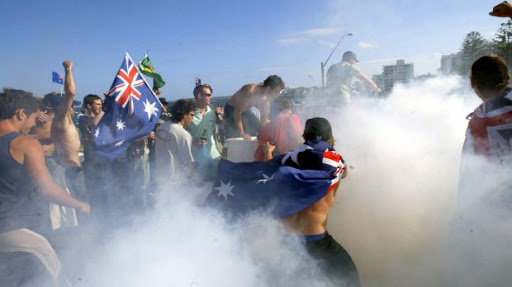 We often read media stories or posts on Twitter, or elsewhere, defending the flag, the national anthem, Australia Day or other icons of nationhood or celebrating the nation state and declaiming loudly that they are outraged by people despoiling or desecrating these “sacred icons”.

The basis for this, often faux, outrage is that these symbols are somehow sacred. Various spurious arguments are advanced for this position – that people “fought and died for the flag” or that not respecting the flag/anthem etc is to be anti-Australian and lacking in patriotism.

In reality there is no basis for any of these claims and they are often advanced for entirely political reasons. For the right of politics, all of these icons are important symbols of the patriarchal state; a state which brings them wealth and power.

The flag and anthem are powerful symbols of the nation state that are used to generate hatred for the “other” (those not of the nation) and to build xenophobia among the population. In many parts of the world they are used to justify persecution and genocide.

For example, as currently, in China (Hong Kong and Xinjiang) and Myanmar. The Chinese Government justifies its crackdown on the basis of patriotism but, in reality this is simply a byword for suppressing any challenge to the power of the Communist Party and its apparatchiks.

Leaving aside the use of the symbols it’s important to understand that these are not longstanding cultural artefacts but very recent inventions designed, precisely, to be used in ways which encourage the obedience of the majority of citizens to those in power.

The oldest of these supposedly sacred institutions is the nation state but even this is an entirely recent creation. It has no long standing cultural or religious symbolism or role. Other than the role and symbolism that the powerful create for it, it has no more intrinsic importance than any other human invention. We might just as well worship the knife which has been around a lot longer and is, practically, far more useful.

Although France after the French Revolution (1787–99) is often cited as the first nation-state, some scholars consider the establishment of the English Commonwealth in 1649 as the earliest instance of nation-state creation.

In general all of the nation states created have been used to protect wealth or power. In the UK, for example, it was used to enshrine the domination of the English over Wales, Scotland and Northern Ireland. The creation of the Arab nation states by the colonial powers was a mechanism to control those parts of the Middle East and their oil resources over which they had claims.

What of our sacred national anthem or that of other countries? Again these are recent inventions. The adoption of national anthems started in the 19th century and many existed long before their designation as national anthem.

Again they have no more intrinsic value than any other community song, such as club football song. They are simply tools to create a sense of unity which suits those in power as that artificial unity can be used to defend or enhance their power via the vehicle of the nation state. It’s one of the reasons that central governments so vehemently oppose autonomy or independence, as we see or saw in Catalonia, Scotland, Wales, Tibet, East Timor, West Papua.

In some cases, such as Australia, the national anthem is not even a century old. 1974 ‘Advance Australia Fair’ was adopted (19 April 1984) as the Australian National Anthem, but in 1976 ‘God Save The Queen’ was reinstated.

On 19 April 1984 the then Governor-General, Sir Ninian Stephen proclaimed, as the Australian National Anthem, the tune of ‘Advance Australia Fair’ and the verses drafted by the National Australia Day Council. It’s not even a good song or one representative of the country. At best it can be considered a dreary dirge which only a few people remember.

At worst Advance Australia Fair is an anthem that is racist at so many levels, written for a white Australia that is irrelevant, or should be. It’s also poorly crafted lyrically, is largely meaningless sentimentality and is a substandard melody.

If the anthem is a racist dirge that should be consigned to the dustbin of history, the flag is equally bad. The idea that we should honour it because soldiers fought under it or died to defend it, is firstly an entirely false statement based on the flag’s history.

Both the blue and red versions were used by armed forces during the First and Second World Wars. A colourised version of a photograph held by the Australian War Memorial of the Armistice Day celebrations in Sydney’s Martin Place, 11 November 1918, reveals both ensigns being displayed by the assembled crowd

Aside from that soldiers didn’t die to defend or honour the flag but because they loved their families, the land from which they came (and not necessarily the nation state) and, possibly, to defend ideals of freedom and democracy. Most would have thought the flag irrelevant. You don’t decide to fight or die for some irrelevant piece of cloth.

The current flag’s original design (with a six-pointed Commonwealth Star) was chosen in 1901 from entries in a competition held following Federation, and was first flown in Melbourne on 3 September 1901, the date proclaimed as Australian National Flag Day. A slightly different design was approved by King Edward VII in 1903.

The Commonwealth Star, also known as the Federation Star, originally had six points, representing the six federating colonies. In 1908, a seventh point was added to symbolise the Territory of Papua, and any future territories.

The current seven-pointed Commonwealth Star version was introduced by a proclamation dated 8 December 1908. The dimensions were formally gazetted in 1934, and in 1954 the flag became recognised by, and legally defined in, the Flags Act 1953, as the “Australian National Flag”.

The designs were judged on seven criteria: loyalty to the Empire, Federation, history, heraldry, distinctiveness, utility and cost of manufacture

In the decades following federation the red ensign was also the preeminent flag in use by private citizens on land. This was largely due to the Commonwealth government and flag suppliers restricting sales of the blue ensign to the general public.

Illustrations and photos of the opening of Australia’s new Parliament House in 1927 show Australian Ensigns flown alongside Union Flags. However, sources disagree on the colours of the Australian flags, leaving open the possibility that either ensign or both were used.

The concept of both the flag and the anthem as important symbols is, therefore, entirely specious and should be seen for what it is: yet another effort to build a contrived sense of nationhood which can be used to justify persecution of those that don’t adhere to that concept and to persuade people to defend the institutions that ensure the power of the already powerful.

So what of Australia Day? In 1838, 50 years after the First Fleet arrived, Foundation Day was declared Australia’s first public holiday in New South Wales. By 1935, January 26 was known as Australia Day in all states except New South Wales, where it was still called Anniversary Day.

Increasingly they are celebrated by the right as a way to drive nationalism and xenophobia. None of them have long historical traditions; but they do have associations with racism, genocide and imperialism. So let’s take a knee, burn the flag and celebrate Australia Day as Invasion Day.

Shibboleth (definition): a custom, principle, or belief distinguishing a particular class or group of people, especially a long-standing one regarded as outmoded or no longer important.