A blog about anything (because everything is political) – views and stories on current and past political and social events.

In a time of deceit telling the truth is a revolutionary act.” (attributed to Orwell but no evidence he said it)

“If liberty means anything at all, it means the right to tell people what they do not want to hear.” (George Orwell, Animal Farm preface)

The expression “the emperor’s new clothes” or variants like “the emperor has no clothes” are based on its source, that is, Hans Christian Anderson fable “The Emperor’s New Clothes”.

Anderson’s tale involves a vain king who was preoccupied with his appearance and his wardrobe. A pair of swindlers took advantage of this by pretending to be able to weave the finest cloth, which couldn’t be seen by people who were either unfit for office or were particularly stupid.

In the Era of neo-Emperors, Trumps, Putins, Abbotts, Blairs we now live permanently in an epoch in which our leaders are, largely ignorant, egoistical, narcissistic, vain and arrogant. This has been true so for so long, now, that the Emperor’s clothes are no longer new. The Emperors are now permanently naked, clad only in a tissue of lies. 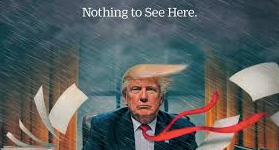 We are inured to the idea that our so-called leaders are either ignorant or malevolently seeking to mislead us for their own benefit. There is no more obvious example of this, globally, than the crisis that is climate change and, in Australia, of the refugee concentration camps.

The democratic fabric is permanently torn, with an essential factor being the willingness of many people, especially on the right, to        engage into an unspoken   contract to wilfully ignore what they know to be true and to conspire with our leaders to believe their lies.

This web site is about those issues but also about the campaigns that have sought to redress the lies and conspiracies of our leaders and the stories around the campaigns.

The Emperor’s Clothes is a blog about everything; about the vicissitudes of life and on issues of all sorts. In this sense it is a blog about politics because everything we do, say, worship, believe, eat, think, or don’t do is political. The idea, for example, that sport is not political or that you can separate sport and politics is as sensible as saying that the church and religion are separate issues. If you spend money on a football stadium, or an Olympic team this money not spent on the homeless. If you play sport with a country which engages in systematic genocide then you implicitly endorse that genocide whether you intend to or not. I believe we should all state things as they are, even if those views are unpalatable to some or even most people, and even if most people disagree with them.

The reality is that although we are taught not to lie and we are taught to tell the truth, the vast majority of people hate the truth because it is confronting and uncomfortable. If you tell the truth you will mostly be unpopular. You will be accused of being ideological. If your statements are a critique of a group of which you are a member, of being a traitor to that group. Dissent is deemed unacceptable and the truth is deemed “fake news”